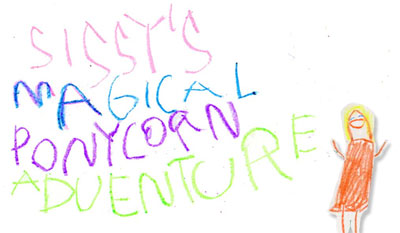 Already the game has had some positive media attention, from interviews on both local radio and television, to several internet news sites including Yahoo news and BoingBoing.

This game must be awesome!!

Is the game deserving of all this media attention by being awesome and fantastic, with hours of intricate puzzles, stunning graphics, and gripping story lines? No.

Then why so much popularity? The graphics, sound effects (including most of the dialog), and story were all designed by a 5 year old, little girl.

Assume for a second that this game had been released on Newgrounds (which is, from what I hear, the #1 portal for Flash content with not enough quality to be allowed on portals with “higher standards”) and Ryan Creighton (the father and lead developer) had proudly announced that he had produced the game all on his own.

Ryan could then sit back and expect a steady stream of classic Newgrounds comments such as “OMGWTF gay”, “-9999/10”, and “giv me my 2mins of life bak”.

At this point you are probably calling me an insensitive prick and have likely already started to flame me in the comments. But, I am trying to make a point here.

First, people love babies, young children, and kittens (for various reasons; you can likely dig up a lot of research on yourself). Anyone who doesn’t believe me apparently doesn’t have family members who have learned to use the “forward” button on their emails.

Seb Lee-Delisle’s iPhone app, Kitten Conveyorbelt, is another game which takes advantage of this exploit ($1 for a slideshow of cats, seriously?)

Somewhat related, the “8 Beyblades for sale on eBay”, despite having several “fake bids”, still received a lot more bid amounts than selling the Beyblades on their own would have. Why? People feel sorry for these crying little children and their situation.

(Next time you try selling your car, include a picture of yourself next to it crying and see if it also works with grown-ups)

Good job, sweetie. I’ll put this up on the fridge where everyone can see it

Second, humans (at least the empathetical ones) will value items and achievements higher if they were produced when the “creator” was under certain limitations (in the case of Cassie Creighton, limitations in age and game development experience).

On a related note, even I can draw better than this elephant! Why don’t my YouTube videos get 6.5 million views?

What can we learn from all this?

Other than the obvious point of “Taking advantage of human psychological flaws leads to more attention and in return buckets of easy money”, there is a broader point to be made (which is by far no new idea):

As I still haven’t produced even a single game, I feel like some sort of hypocrite (did I use that word correctly or is there a better term?) telling people how to design their games. After all, what do I know?

Luckily, the principle has many more applications. Often when presenting something, you are very limited, such as the title of a blog post, description of a game, or a small introduction in a conversation or speech.

Presenting any creation as “just another of many” will quickly cause the listener to loose interest. What makes your product unique? How does it stand out from the rest? (Note that I do not support lying or over-exaggerating in order to glorify what you are selling! Scumbags…)

Perhaps it will gain more attention if you release it for a good cause, such as donating all income from a game to earthquake/tsunami victims.

Perhaps even take advantage of a few other human psychological flaws, such as curiosity to reel in your listeners (this blog post title got you here, didn’t it?)

Does Apple exploit the mentally ill?

I simply cannot end a discussion on exploiting human psychology without bringing up Apple.

As I have said many times before (which someone said before me, but I don’t remember the source), Apple sells a religion, not a product. When you buy their iPhone, you buy an experience, and a ticket into the community of awesome people.

In a nutshell “Cigarettes Apple’s products make you look cool!”

Is Ryan Creighton exploiting our weaknesses for monetary gain?

It’s possible, but I doubt it.

This may be a good place to add that all donations and income from Mochi Ads are going directly to Cassie’s college fund (so help her education, and donate! Link is on the game’s page).

Does this mean you hate the game?? And little children?!?

Alas, I am neither a Vulcan nor a sociopath, and susceptible to the same flaws of human psychology as everyone else, so yes, I thought it was cute.

The one thing in specific I enjoyed were the small witty bits of dialog. They reminded a bit of the the comments found in Lemony Snicket’s books (sample excerpt).

My favorite quotes from the game (spoiler alert)

Your’e a mouse now. How do you like THEM apples?
That’s what you get for being evil! AND a lemon!

Did you write this post to stir up conflict and flame wars, or perhaps to ride the wake of Ponycorn’s success?

Neither, by writing this post I’m avoiding the PHP work on my plate, and since I’m still getting something done, I can avoid the feelings of guilt that come from procrastinating my real work.

All comments are held for moderation; Markdown and basic HTML formatting accepted.