Say you already added a tag, but later realized that it was in the wrong place, or perhaps you needed to add a few more last-minute commits. How would you go about moving it?

Unrelated but important side note: Since you are tagging in Git, you are using the -a flag, right?

You could delete it and re-add it, but all the hard work you put into writing the tag’s description would be lost.

Instead, choose the place in your history where you want the tag moved to, tag it like you usually would, but add -f (or --force) to the command; that extra flag will allow you to replace the other tag with the same name. And a pleasant surprise appears if we try to overwrite an existing tag: 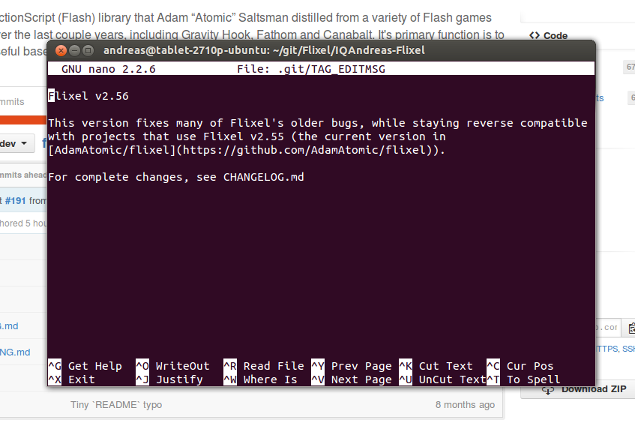 Hey! That’s my old tag description! Now you can edit it if you want, or just save it as the way it was.

Editing the tag on the server

If you have already pushed the tag to the server and want to fix that, first make sure your local version of the tag is correct. Then all you need to do is make another push using the same -f (or --force) flag.

Remember to alert any other developers on the team if you ever “force” a change like this. If they still have an “old” version of the tag around, it may cause conflicts when they try to push to the server!

If the tag is edited on the server, but the local one is old

Say someone else moved a tag, but the version in your local repository still points to the old commit? First, delete the local tag, then pull in the changes from the remote repo; the new tag will be added automatically.

So, for example (in my case, the tag name is v2.56 and the remote repository is named origin):

In this example, the --tags flag was actually optional, since git fetch will by default automatically fetch tags along with any modified branches. But there is no harm leaving it in there for clarity.

All comments are held for moderation; Markdown and basic HTML formatting accepted.